When he was a boy of 10 years age, Arkan Hussein Kjo had to bear witness to the genocide that the ISIS militias committed against his community – the Yazidis in Iraq. Five years ago, his family fled the terrors of ISIS to Germany; to Celle, which seemed to them like the most safest haven compared to Kojo, their home town in the Shingal region.

Now Arkan fell victim to a senseless act of violence. The 15-year-old Yazidi boy was attacked and stabbed to death on tuesday evening, April 7th. The injuries were so severe that he did not survive them. He died in hospital. The prime suspect, a 29-year-old man, who could be apprehended at the scene of the crime, has so far remained silent. According to initial findings, Arkan was riding his bicycle shortly before 10 pm when he was suddenly attacked by the man, who is said to have hidden in a house entrance with the intention to ambush passers-by at random. Based on what is known about the crime until now, the fact that Arkan became the perpetrator’s victim was purely coincidental. A racist motive for the crime seems unlikely. However, the investigations are still ongoing.

It is also particularly painful that a funeral service take place in a larger circle, as it is tradition in Yazidi culture, due to the current measures to contain the Corona virus throughout Germany.

Our thoughts are with Arkan’s bereaved family and friends. 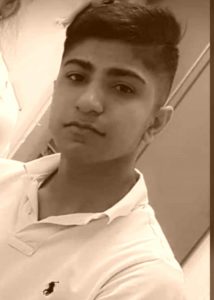 P.S.: We would like to thank our devoted followers, supporters and friends for the many compassionate messages that reached us about this terrible tragedy!

BACK TO LIFE – EMPOWERING WOMEN WITH SKILLS FOR THE FUTURE

BACK TO LIFE: ONE CANNOT FLEE FROM A VIRUS